This site is built using the SSG A Static Site Generator compiles the website before deployment. Then the generated web content is simply retrieved as-is by the client without any code running at retrieve time. Jekyll A Static Site Generator (SSG) built with ruby. Popularized as of its adoption in GitHub Pages.
which goes very well with the developer flow of code-compile-inspect. By generating all content locally, I know exactly what I will be deploying to my hosting provider later on.

As I’ve written a few posts already since I started this blog two months ago I started to see a pattern. I started to feel a repetition. I started to get annoyed. Why what? I believe it’s a nice convenience for readers if some more less known technical terms or abbreviations are explained, so that they don’t have to go and look them up by themselves. In many posts I would for example use the term SSG, which stands for Static Site Generator. I would spell the full term out in parenthesis and maybe even link to an external resource explaining the term. It could look like: SSG (Static Site Generator).

As I can not assume that the reader has read my previous posts, I found myself starting to copy-and-pasting those term links and explanations within parenthesis for several terms from older posts in to new blog posts. Whenever you find yourself copy and pasting on routine, it’s an excellent opportunity to take a step back and think DRY Don’t repeat yourself - a software development principle
. Wikipedia says:

This software development principle, or even principle in general, is one that I hold especially strong to my heart. Whenever I find myself doing a task that I’ve already done in the past I directly think “can I automate this? Is there a way where I can avoid having to do this task again?”.

What could we do about the situation?

I took a survey of what’s already available on the Internet and quickly found a post at idratherbewriting.com showing how to make a tooltip using twitter’s Bootstrap. It looked rather simple, but I don’t wan to add a bootstrap dependency, and to really use this conveniently it must be productionized to a plugin!

Time for Another Plugin

As I recently developed the Jekyll plugin jekyll-google_search_console_verification_file I knew a bit about the ruby and Jekyll development system and the barrier for creating another plugin was low! So why say no to such an opportunity to make another one? As I’m hoping it will be a useful plugin also for other Jekyll users, it was further motivating to make the effort to make this a plugin.

The idea of the plugin is very simple: 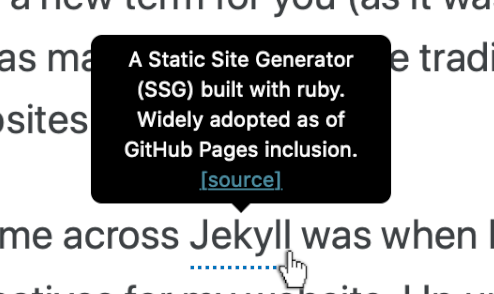 Well this is exactly what I did and you’ve already seen these terms and tooltips several times in this blog post!

It’s also possible to provide an optional URL to further term definition or source reference. To also support mobile devices, this URL link is placed inside the tooltip pop-up itself, rather than making the term itself clickable. This is so that on mobile device, you will first tap the word to get the hover tooltip, then click the link in the tooltip if desired.

1) Add this gem to your Jekyll site’s Gemfile

2) In your site’s _config.yml, enable the plugin:

3) Create a _data/glossary.yml file, according to the ‘Glossary Term Definition File’ section below, with your terms.

5) Add CSS styling for the tooltip from jekyll-glossary_tooltip.css. You need to make sure that the pages where you will use the glossary tag have this styling applied. Typically this would mean 1) copying this file to your assets/css/ directory 2) editing your theme’s template for blog posts (or what pages you desire) to include this CSS in the header like <link rel="stylesheet" href="/assets/css/jekyll-glossary_tooltip.css">. However you could also copy this file’s content in to your main.css or main.scss or however you build your site’s CSS.

6) Now just build your site and you will get nice nice term definition tooltips on mouse hover (or mobile, tap) for you terms!

Create a file _data/glossary.yml to host your shared term definition entries. This file should contain a list of term entries like

On any page where you’ve made sure include the needed CSS styling, you can use the glossary tag simply like

Note that a term name can not contain a ,, as this is the argument separator character.

Simply modify the rules jekyll-glossary_tooltip.css that you copied to your project. The tooltip is based on this tutorial. View the generated HTML output to see the HTML tags that are styled, or check the tag.rb implementation in the method render().

That’s it. Now you can make it easy for your readers e.g. in technical blogs, and at the same time not spend much time yourself repeating yourself in the markdown files!

If you find this plugin useful or have suggestions on improvements, please let me know in the comments below or create an issue in the GitHub Project!

No webmentions were found.

Your email address will not be published. Required fields are marked *

You May Also Enjoy

Remote Backups - Just Do It I wanted to share here a project that I did a few years ago but that is still very relevant. What is very relevant? To have off-s...

With this post I’m declaring my latest project nestedtext-ruby more or less done (for now)! It’s a library for a new exciting data format designed to address...

Writing a chat bot is maybe something that one does more a junior getting in to programming. It turns out it can still be fun even though I’ve programmed for...